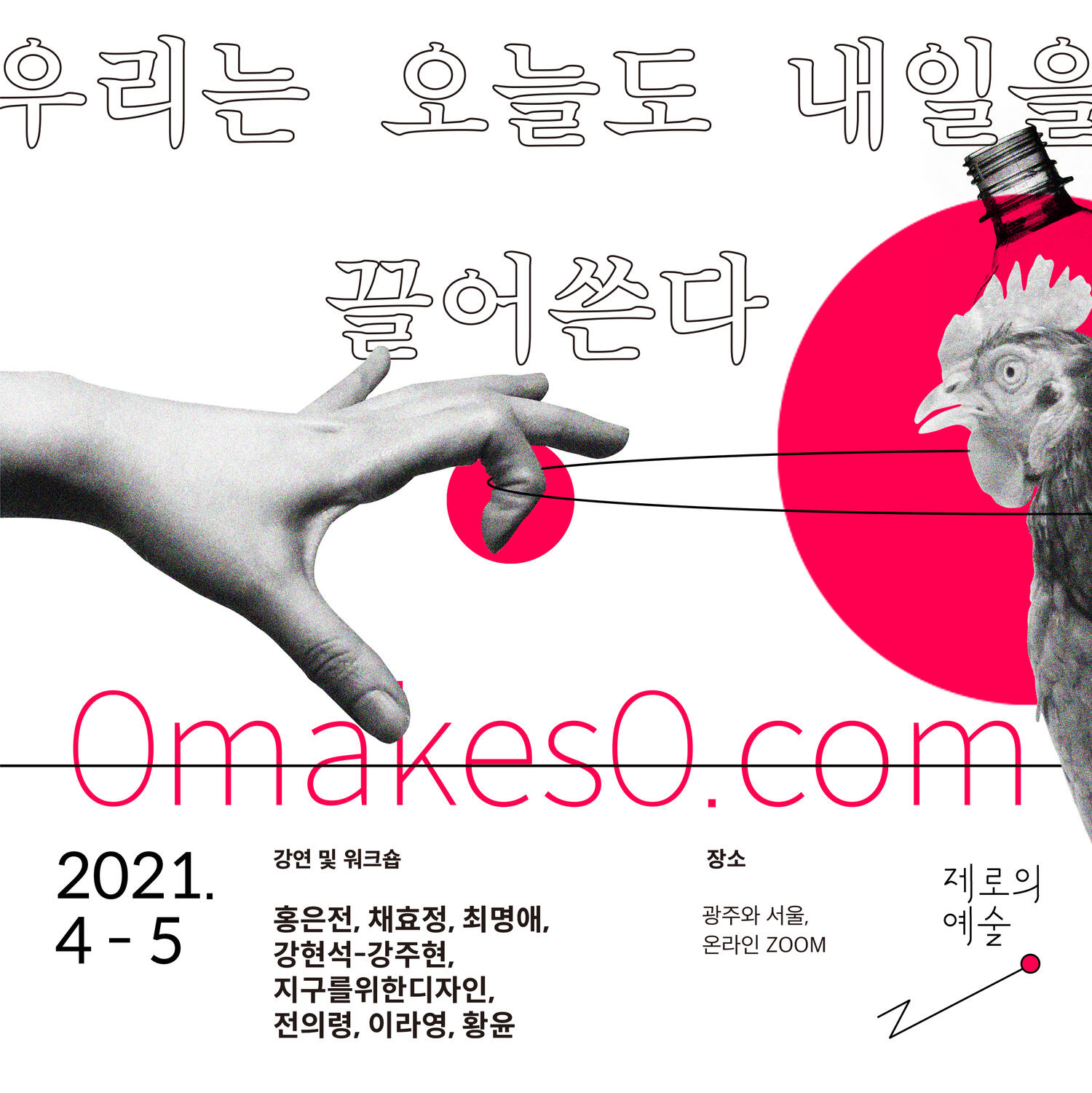 This relay lecture program about veganism, animal rights, ecology, and the climate crisis considers the kind of public perception art should have, while going through the disasters swept through by the climate crisis and pandemic situation. This is a time to consider that the most urgent matters of society, the climate crisis and infectious diseases caused by exploitation of wild animals, stem from anthropocentric thinking and that these issues are not completely separate from various issues affecting minorities, such as women, disabilities, and refugees. Looking back on the human way of dealing with non-human animals, which is reduced only to exploitation, objectification, or affection, Yesterday’s Tomorrow creates a forum for discussion on a political imagination beyond the current status quo.

< Invitation to an Inefficient and Beautiful World > Eunjeon Hong
Lecturer Eunjeon Hong shares her experience of moving to another world while meeting Nodl School and the cat Kara. She will talk about a new way of life that does not center on reason and language, competition and efficiency, and the intersection of animal and disability liberation, anthropocentrism and ableism. We welcome anyone with an interest in disability, human rights and animal rights, and those who want to move to another world or start protesting from where they are now.


< Reclaiming ‘Green Resistance’ > Hyo-jeong Chae
At a glance, the ‘Green New Deal’ seems like a good thing, but the Korean Green New Deal is somewhat strange. Businesses are excited to promote the Green New Deal and the government is pouring money down the drain for the project, while workers and farmers are outraged. Why did this happen? Is the Korean Green New Deal project simply entrenching the ruling coalition under the pretext of the climate crisis and worsening inequalities between class, gender and regions and the discriminatory relationship between humans and non-human beings? Let’s come together and discuss actions we can take now so that we don’t hand over our future to their New Deal. This lecture aims to explore the reorganization of the subject and resistance in order to retake the green, not green capitalism, but the green of a “Red-Green-Purple” paradigm.

< Rewilding: A Transformative Experiment to Explore the Future of the Anthropocene > Myung Ae Choi
Rewilding is a new paradigm of the conservation of nature (including humans) that enables the manifestation of ecology and behavior of non-human beings. This lecture will provide examples of Dutch land reclamation and restoration, the reintroduction of gray wolves (Canis lupus) to Yellowstone, and recent attempts to restore the body through probiotics. The lecturer will introduce recent attempts at rewilding both nature and the human body and consider the significance of the paradigm of rewilding in exploring a new human-nature relationship to overcome the Anthropocene.

< The Tuvalu Project - Sum: City > Juhyun Kang, Hyunsuk Kang
The Tuvalu Project delves into the issues surrounding climate change that Tuvalu, one of the countries most vulnerable to rising sea levels, faces. This project takes into account sustainability and architectural scenarios based on an archive of related technologies and cases. The workshop <Sum: City> with ‘Zero Makes Zero’, touched the edge of the flexibly open Tuvalu Project and made an extension to the project’s aim by following a circuit of ideas consisting of ‘Tuvalu – My Home – Virtual Community.’ This workshop examines the thoughts and discussions shared by participants in a series of courses and introduces a new body of the extended Tuvalu Project based on this.

< Table of Balance for Coexistence > Design for the Earth
The one and only planet we can live on. How can we live a balanced life in harmony with other lives on this precious planet? In this program, participants will discuss ecology and the environment based on the concept of green design that minimizes environmental impact. In addition, participants have time to rethink and expand the keywords behind the relationship between nature and humans, the connected world, and the balance for coexistence by using various teaching materials and board games produced in a green design method.

< Human-Animal Entanglement in COVID-19 > Euyryung Jun
The COVID-19 pandemic is an opportunity to re-read the human-animal relationship. However, our imaginations still seem stuck in the limitation imposed by modern perspectives on the paradigms of oppressors-humans and scapegoats-animals. In this lecture, we intend to explore how the pandemic crisis is reimagining the human-animal entanglement.

< Kitchen and Table in Art > Ra-Young Lee
We look at the culture surrounding ‘eating’, the most basic activity for living, focusing on works of art. Focusing on the kitchen, we plan to take a look at the kitchens reproduced by women and female painters in art. Anyone interested in ‘eating’ can join the lecture.

< Shall We Love, or Eat > Hwang Yun
In this lecture, participants will view film director Hwang Yun’s documentaries An Omnivorous Family’s Dilemma and Chicken in the Square together and have time to consider the connection between animal rights, human rights and feminism. This is followed by a discussion between participants about consuming animals and plants in the climate crisis and pandemic eras. It is conducted in the form of a conversation between the documentary planning team and participants. Adolescents who want to become vegetarian but are worried about school meals or those who want to talk about sustainable eating are welcome. *If you would like to participate, please watch An Omnivorous Family’s Dilemma before attending the lecture. Chicken in the Square will be screened during the lecture.